The QuanderQuality Publishing House’s mission is to promote a greater awareness and appreciation among the general public for the uplifting values that were traditionally passed down from one generation to the next for the ultimate good to society. QuanderQuality Publishing House is committed to the production and distribution of under-documented stories of African American individuals, families, communities, and institutions with an inspirational message. We guarantee the highest level of professionalism, consistent with the quality of our products and services. Providing satisfaction to our customers, to thus create a loyal following within our readership, is how we fulfill our mission. 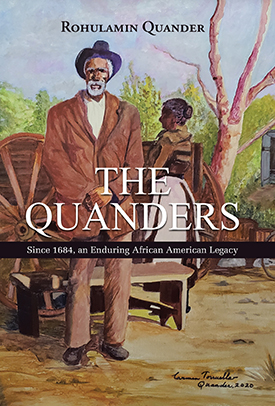 The selected title of this book, The Quanders – Since 1684, an Enduring African American Legacy, is self-explanatory and becomes more so once the reader delves into the content. Tracing the legacy of Henry Quando and Margrett Pugg, his wife, and their progeny, from 1684 to the present, unfolds a story of triumph and sustained accomplishment beyond and in spite of whatever racially-inspired obstacles were placed as inhibitors on the road to success.

The Quanders – Since 1684: An Enduring African America Legacy introduces stories that constitute the Quander family legacy as one of the oldest consistently documented African American families in the United States. This is not so much an African American story, as it is an American history story, written from an African American perspective. It features examples of faith, strength, focus, character, and triumph emerging from and beyond a series of imposed stumbling blocks. As well, the author acknowledges the contributions of those who came before and builds upon their achievements and successes to the benefit of future generations.

While most Americans respect our nation and its Founding Fathers who made it a reality, the Quander story expands the scope of that recognition by painting smaller parallel stories addressing what else was ongoing, i.e., incidences, events, setbacks, the cumulative effect of which helped us, as people of African descent, to hold our heads just as high as other communities. Indeed, we too shared in the building of this great nation and in seeking to fulfill the American Dream. 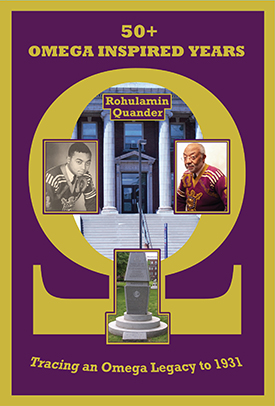 On April 4, 1964, Rohulamin Quander, the author, was inducted into the Omega Psi Phi Fraternity, Inc., at Howard University, the founding site of the 1911-establishment of a fraternal organization dedicated to Manhood, Scholarship, Perseverance, and Uplift. The Four Founders of the fraternity – Dr. Ernest E. Just, Dr. Oscar J. Cooper, Professor Frank Coleman, and Bishop Edgar A. Love – would each distinguish themselves in their respective professional fields. A double fraternity legacy brother, traced through both his uncle (Joseph P. Quander, Theta Psi Chapter, 1931) and his father (James W. Quander, Alpha Omega Chapter 1958), he grew up in the positive charged atmosphere of the fraternity, keenly aware of what it meant to be a “Man of Omega.”

Now, 50+ years after that defining moment, and still influenced by the fraternity’s Four Cardinal Principles noted above, the author shares his many exciting and diverse experiences with others, underscoring how being a member of a Black Greek-Letter fraternity instilled values, which he willingly passes on. Membership on this life long journey is likewise a tribute to African American history, culture, and social values. This experience is not limited to Omega Men, but typical of all who are members of the “Divine Nine,” a term that the nine organizations use to colloquially refer to themselves.

This 440 page, 35 chapter book is unique. More than a personal history, this memoir also recounts what it means to be a man, including responsibility, rendering service, and being inspirational to others. This “first” – an Omega inspired memoir – will also help the members of other Black Greek Letter Organizations and, more particularly, the public at large, gain a better understanding of what fraternal life and sustained commitment is like within the nine Pan Hellenic organizations, and how each of them, using Omega as an example, have been agents for positive and lasting change in society.

A retired senior administrative law judge for the District of Columbia, the author interacts with people from all walks of life, influenced by the association, and likewise having influenced many of them in significant ways. While the fraternity is not his life, the principles, including the implied “Fifth Cardinal Principle,” – Service, are his personal constitution, guiding him in his life long journey of being a responsible, giving, and caring person.

This book is the intriguing biography of Nellie M. Quander, a woman whose lifelong contributions made a sustained difference in African American life and culture. Nellie M. Quander was the Lead National Incorporator (1913) and First Supreme Basileus (1913-1919) of the Alpha Kappa Alpha Sorority, Inc., founded at Howard University in 1908. Initiated in 1910, and its president from 1911, she led the sorority in pursuit of its national mission to provide “Service to All Mankind” and restored and retrofitted it after the tumultuous breakup in October 1912, when several of the members abandoned the sorority and established another organization. AKA’s international membership counts more than 225,000 professional women from all races and walks of life, including Michelle Obama and Vice President Kamala Harris.

Nellie Quander’s life was exemplary, a beacon for living a life dedicated to helping others. Beyond AKA, the biography relates life challenges and exciting stories about her service to the YWCA; the 1913 Women’s Suffrage March, in which she played the key to assuring that African American women were accorded a non-segregated place of prominence among the D.C. delegation; monitoring the working conditions of African American women and girls during World War I; church and alumni organizations; and teaching youth in the District of Columbia Public Schools for 50 years. She interacted with several well-known African American men and women, including Mary Church Terrell, Mary McLeod Bethune, Dorothy I. Height, and Carter G. Woodson.

The biography features multiple testimonials, including from Dr. Dorothy I. Height, former president, National Council of Negro women, Barbara A. McKinzie, 27th International President of Alpha Kappa Alpha Sorority, Inc., and Louise A. Rice, 23rd International President of the Delta Sigma Theta Sorority, Inc. Nellie Quander’s life is an integral part of American history. It should be read by everyone. 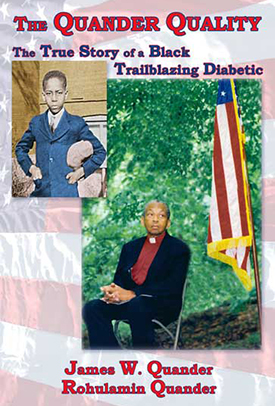 The Quander Quality – The True Story of a Black Trailblazing Diabetic (2006)
by James W. Quander and Rohulamin Quander

This book is the riveting story of James W. Quander (1918-2004), who, according to doctors in 1924, would not live to see his 10th birthday, due to the virulence of his diabetic condition. Despite an undiagnosed major medical meltdown in 1921, and another episode in 1924, that confirmed the ailment, James W. Quander lived a full life, characterized by sustained accomplishment through his eight decades. Born in racially segregated Washington, D.C., and facing health challenges that imposed interruptions in his schooling, Quander graduated from the Paul Laurence Dunbar High School (Class of 1936), and Miner Teachers College (Class of 1940). With a career in federal service that spanned 34 years, he broke down many racial barriers that heretofore were imposed against African Americans.

Marrying a Barbadian woman of East Indian and Irish background, he also broke down those barriers that mitigated against marriage across racial lines. In 1971, Quander was ordained as one of the original 16 Permanent Deacons in the American Roman Catholic Church, which, after an 800-year hiatus, reinstituted that level of clergy. Always in demand as a clergyman and lay health advisor, Quander’s favorite quote was, “Diabetes is not a death sentence, but rather a challenge to live.” The favorite retort to this statement, as expressed by Rohulamin Quander, co-author and son, is that, “He faced the challenge, and was triumphant.”